Hugh Returns to the Site of His WWII Plane Crash

On Christmas Eve, 1944, Hugh McNaughton and 12 other men were on a routine patrol in their PMB-5 seaplane. As they were returning to their base in Hawaii flying through dense fog at 1:00 AM, the electrical system went out. The seaplane crashed and exploded.
Hugh was one of six survivors pulled from the wreck. He was unconscious for three days, and when he awoke, he didn’t remember the crash. But he never forgot his lost crewmates. For a long time, Hugh thought about going back to say a final farewell to the men who lost their lives there. He never had the financial resources to return until TENA provided the funding for Wish of a Lifetime to send Hugh back to his naval base on July 16, 2019. Hugh was 92 years old. He realized he’s one of the few that have a first-hand experience with WWII and was seeking a sense of closure.
He got a chance to retrace his steps where the crash took place; and most important, he was able to officially say goodbye to his lost crew by tossing a lei in the water.
Hugh finally got his sense of closure ... 75 years later. 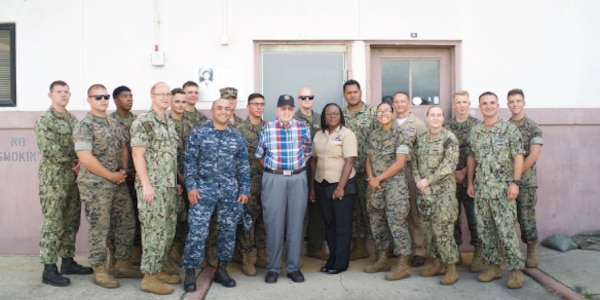 Read other Wish Of a Lifetime stories